The Transcendental Meditation® (TM) technique is increasingly being used by institutions as an integral part of their training and recovery programs. The following are three examples from very different settings:

Boulder Crest Retreat, located in Bluemont, Virginia 50 miles west of Washington, D.C., is the nation’s first privately-funded rural wellness center dedicated exclusively to U.S. combat veterans and their families. Transcendental Meditation is the cornerstone meditation technique of their combat stress recovery program for post-traumatic growth (PTG) called the Warrior PATHH. Warrior PATHH is an 18-month program, which begins with a one-week, high-intensity experience at BCR and then provides regular support at a distance over the following months. It is a multi-modal treatment program, which also also includes labyrinth walks, archery, kayaking, horticulture, music, art, bonfires, and brotherhood/sisterhood.

Dusty Baxley, executive director of the Boulder Crest Retreat, refers to TM as the “secret sauce,” which helps make everything else work. “As a combat veteran myself, I know what it is like to be on both sides of feeling down and filled with anxiety and being able to find peace and calm,” says Baxley. “Transcendental Meditation is life-changing, especially for combat veterans.”

Boulder Crest Retreat focuses on helping veterans and their families achieve “post-traumatic growth.” TM is key to their program because it is something that the veterans can take with them and continue to use to reduce stress, build resilience, and bring them closer to themselves after they leave the one-week retreat. 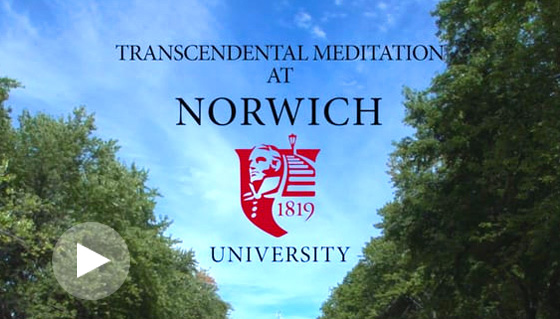 Norwich University in Northfield, Vermont, is the oldest, private, military college in the United States and the birthplace of ROTC. The TM program began at Norwich in pilot form in 2011 with funding from the David Lynch Foundation. In that year, thirty students were randomly assigned to a platoon learning TM and another thirty to a control platoon.

President Richard Schneider, Rear Admiral USCGR (Ret.), recalls that “within four or five weeks, the kids who didn’t get the training were complaining that the other kids had an advantage over them.” Within 90 days, the platoon that learned TM was outperforming the control platoon in every measurable functional area.

These results were substantiated by psychological and neurophysiological tests conducted by the faculty at Norwich. The research found significant reductions in depression, anxiety, and stress in the TM platoon and significant increases in constructive thinking, behavioral coping and resilience. This study was replicated in the next year at Norwich and they found the same results.

By fall of 2016, more than 600 students had learned TM, including more than 10% of the 2016-17 students. As President Schneider says, “We owe it to [our students] to give them the very best tools to win, and I think this is one of those tools.”

Fort Gordon in Augusta, Georgia, is home to Dwight D. Eisenhower Army Medical Center. Since 2012, Transcendental Meditation has been taught at Eisenhower’s Warrior Transition Battalion—which helps injured soldiers transition either to civilian life or back into active duty—and their state-of-the-art Traumatic Brian Injury (TBI) Unit. The program was initially supported by funding from the David Lynch Foundation and now, because of the success of the program, it is being funded through contracts from the Department of Defense.

The impact of TM on soldiers at Fort Gordon has been documented via research carried out at Eisenhower. The study showed that when soldiers with PTSD practiced TM, they stabilized or reduced their need for psychotropic medicines compared to controls and had a reduction in the severity of their psychological symptoms. The findings have encouraged a number of other TBI clinics around the country to consider using the TM technique as an adjunctive therapy.

“I had about 1200 hours flying helicopters when I was a youngster…. There were a lot of stressful situations over the course of those years. I wish I had had the Transcendental Meditation tool then.”
—Stephen T. Rippe, Major General, US Army (Ret.), member Board of Trustees at Norwich University

“I was given TM training, the greatest gift I have ever received from a stranger. Just when I felt like slipping over that cliff, away from the pills, away from the pain, there it was. It was not a branch for me to grab hold of, but rather a taproot under my feet.”
—SSG (Ret) Todd Knauber

“It’s nice being given tools to help recover from PTSD and TBI’s that are not medications that we can take with us and use whenever and wherever we are. It’s nice being empowered to participate in your own care and be able to utilize this tool when needed.”
—SGT Branson on TM training at EAMC Fort Gordon

“TM is the greatest tool I have had for stress management and keeping clarity in my life. If I’m feeling fluttered and crowded with all of the different responsibilities I have, I do TM and suddenly I know what I have to do.”
—Liam Carroll, Junior, President Student Government Association at Norwich University

“I started meditating and I started noticing the difference right away. I became more alert and my body became more relaxed. My mind was rejuvenated after every time I meditated and that semester I got the highest GPA I’ve ever gotten, with 23 credits, the biggest course load I’ve ever taken.”
—Brendon Jennings, a senior at Norwich University

“I would say the biggest benefit is the energy. In high school I would drink a whole thermos full of coffee and I don’t have to do that anymore. It feels good to not have to rely on things like that and be able to just do it myself.”
—Freshman Ray Witkowski at Norwich University